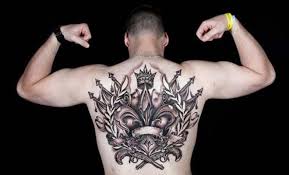 Humans have adorned themselves for thousands of years. The Scots have colorful plaids that represent their tribe, Pacific Northwest Indians tattooed their chins, the Jews have the Star of David, Christians have the cross… seems everybody has a group they identify with. A popular icon today is the fleur de lis. I see it all the time. It was flashed around a lot during the movie, The Da Vinci Code, as if it were the emblem of some powerful secret society. Perhaps it is, but it may also represent bravado among the most oppressed of us all, the enslaved.

Spanish King Ferdinand made some bad choices. In his realm as master of the kingdom, he was quite cruel. He instituted the Inquisition, and followed through on his plan to make Spain a Catholic country, leading to the death or banishment of thousands of innocent subjects who refused to submit. But when Spain had colonies in the New World, his choices were also harsh. Ferdinand expected his New World subjects to trade only with Spain. That didn’t go over well. We have the history of pirates and smuggling to prove that. Those whose parents were born in Spain but they themselves were born in the New World were referred to as Creoles and they did not receive the respect they deserved. Laws that allowed only Spanish born subjects to hold higher offices in the government and within the Church brought discontent. Revolts of all varieties in the New World grew so strong, Spain was unable to control the colonies and eventually lost them.

I just finished reading an article about the Magna Carta. (The Rule of History by Jill Lepore, The New Yorker, April 20, 2015.) Lepore writes about England’s King John and how in 1215 he signed the Magna Carta. She writes:

“Magna Carta is written in Latin. The King and the barons spoke French. ‘Par les denz Dieu!’ the King liked to swear, invoking the teeth of God. The peasants, who were illiterate, spoke English.”

I shouldn’t have been surprised that the King and barons spoke French. Being a fan of early European history, I know that in 1066, William the Conqueror claimed his right to the English throne. William was from Normandy and spoke French. But, because English has been perfected and many take great pride in their mastery of it, it’s strange to think of those who spoke English as being, “illiterate.”

When the Moors crossed the Strait of Gibraltar and entered Spain in 711 A.D., they became the rulers of Andalusia and much of what we know today as modern Spain. At the time of this invasion, there were Christians and Jews who had built great wealth. The conquering Arabs (rulers of the Moors), were not interested in converting their subjects, they had come for wealth and prosperity so let the Jews and Christians go about their lives speaking their languages and observing their religions. The era of Moorish rule, though it had its infighting, was a time of great cultural growth. The arts and sciences flourished, Arabs and Jews developed friendships and had intellectual debates about math, poetry and religion. Leather working, blacksmithing and the building of spectacular mosques are remnants of this enlightened era.

But not all of Spain was conquered. The defeated Visigoths (Teutonic/Germanic tribes) were able to hold a tiny portion of territory in the far north of Spain. This region became the Christian fighting north and they did not give up. Eventually, through several centuries, the Christians regained all of Spain. And a few hundred years after that, Spain was in full blown religious oppressive mode and with Ferdinand and Isabella in charge, wrought great havoc on the Moors and Jews who lived in the Spanish provinces.

Last week I read in the newspaper that a tooth was found during the construction phase of a large highway overpass. That single tooth stopped all construction. Native Americans came from south and west to analyze the situation. If the tooth was human, it could signify that the construction company was digging in sacred ground.

To non-Indians, holding up a multi-million dollar construction site might seem ridiculous. To Indians… it is everything. An ancient burial site is the unbroken chain of ancestry… the mothers and fathers who came before them. Some might argue, “Well, you didn’t even know it was there, so what does it matter?” The reason the Indians didn’t know it was there was because they were run off during the 1800s when Europeans claimed the New World was theirs. If the Native Americans hadn’t been “removed,” they would be protecting their ancient burial sites to this day. Imagine what a sacred spot that would be.

The Nuremberg Laws take their name from the German city of Nuremberg, because that’s where the laws were signed by Adolph Hitler in the fall of 1935. These laws brought extreme persecution to Jews. German Jews were stripped of their civil liberties and were no longer considered a part of the German nation. They were Jews only. The German citizens who kept their legal status were called “a national of German or kindred blood.” It even became against the law for a Jew to fly the German flag. The Nuremberg Laws prevented marriage between Jews and German Nationals. The law went further and made it illegal for a German National to have sex with a Jew. The Nazis were deadly serious about keeping German Nationals away from Jews. They were concerned with what they called “racial pollution” and they went to great lengths to stop it. German couples were examined by doctors before they were allowed to marry. The Nuremberg Laws were overseen mostly by doctors because they fell under the jurisdiction of Germany’s public health system. The public health agencies offered marital counseling centers and by 1936 one of the Nuremberg Laws, the very strict Marital Health Law was administered. The doctors who administered the Nuremberg Laws brought great disgrace to Germany. Suellen Ocean is the author of the novel Chimney Fire. Available here: http://www.amazon.com/Chimney-Fire-Steinberg-Conspiracy-Book-ebook/dp/B00XDCPLEW

Or as an eBook or computer download through Smashwords:

Today I humbly present my novel, Chimney Fire. The main character is a Jewish fellow named Rudy Steinberg, a California slacker who at fifty is paid a visit by a German attorney whose shocking information disrupts Rudy’s life. I came up with the idea twenty years ago and when I found the outline, I thought it would be fun to collaborate with my younger self. Fun is not the correct word. I spent the winter reading and watching films about Nazis who murdered millions of people, including Germans. Nevertheless, I said I would and I did. It’s spring now… and Chimney Fire is complete. I can’t say that I understand human nature any better but what I do understand is that people do bad things and we need to speak up because as the victims will tell you… the worst is unthinkable. “Chimney Fire” is available here: http://www.amazon.com/Chimney-Fire-Steinberg-Conspiracy-Book-ebook/dp/B00XDCPLEW